The Trump protests were held barely 24 hours after a pro-Trump rally in Port Harcourt, Southern Nigeria turned bloody as security officers opened fire on members of the Indigenous People of Biafra (IPOB) who organized the once peaceful event. 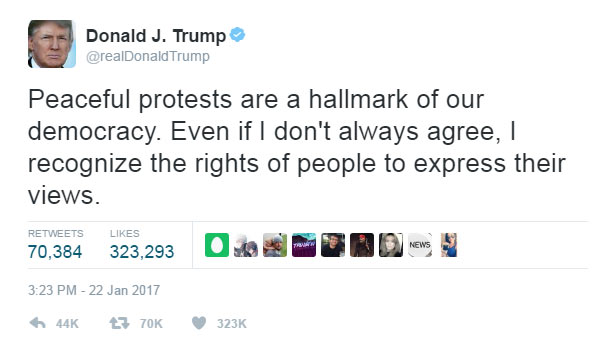 Was that tweet directed at President Muhammadu Buhari and Nigerian security forces?

South Africa: Another lady set on fire by boyfriend, dies after days of agony (Graphic photos)

‘Buying Bentley or a Plane won’t change the fact that “your...

EPl Clash: Arsenal Vs Chelsea by 5pm ,Lineups And Formation.

Lobatan! Bride Found in The Hotel With Ex, On her Wedding...

Is It Wrong For Your Fiancee’s Parents To Ask How Much...

We all know that a group of people is called a crowd, more than two cars is called a Fleet...